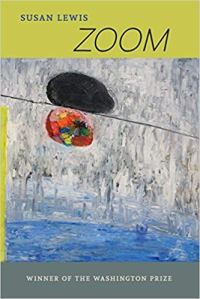 In a recent conversation about prose poetry, I found myself tasked with defining what makes a prose poem “poetry” exactly. I fell back on my usual starting point, some riffing on Charles Simic’s idea shared in an interview that “[what] makes them poems is that they are self- contained, and once you read one you have to go back and start reading it again. That’s what a poem does.” What’s great about this quote is that it connects the reading act to the act of rereading, highlighting poetry’s ability to get things said in unique, memorable ways. I say “memorable” here, and feel the need to qualify it as not immediately memorable. That is to say, a phrasing’s distinction comes from the push-pull effect of being familiar enough to make sense, but unique enough to stand out and make us pause.

This movement between familiarity and distinction is one of the driving engines of Susan Lewis’ recent collection, Zoom (The Word Works, 2018). While the collection’s title brings to mind the film technique of zooming in, I find it also applies in terms of speed, in this case, the varying speeds of the reading act. This read on the title is invited, in a way, by the choice of having the individual titles in the collection be the first words of the poems. By having the poem begin with the title, the voice of the poem is engaged from the first words interacted. The opening poem, “Everyone Agreed,” executes this move in a self-revealing way:

this was a thrilling catastrophe. There were the usual photo-ops & spell-checked swoons. Octopeds got the jump on the rest of us, but their webs were useless against the suck. Spare fur was exchanged for sexual favors until the water fermented and all hell broke loose. No one remembered to access their 20:20 hindsight until the razor light blinded us with its odor of inferiority. There was anger and danger beyond our wildest dreams, which stopped coming once the humdrum imploded, divesting us of our history & its discontents.

As I mentioned, having the title be the first words of a poem means the voice is there at the start of the reading act. This move creates an immediacy that propels the reader into the “thrilling catastrophe” of the poetic act. This momentum is then interrupted by Lewis’ choices in diction. The phrasing of “There were the usual photo-ops & spell-checked swoons,” for example, causes a reader to pause; the sentence is structured as a traditional sentence, but the meaning of “spell-checked swoons” causes one to pause and wonder. Yet, the decision to structure this phrase within a prose poem, which builds off the familiarity of the traditional sentence and paragraph, forces the pause to be brief. Were this poem broken into lines, the reader would be given the handhold of line break and stanza break which invite dwelling. Here, the poem marches on through the sense of a paragraph. One reads the rest of the poem propelled by this push-pull effect.

Depending on the reader, one could say that the poems of this collection are read at the mercy of this push-pull effect. Taking this perspective, however, would be to miss out on the rich difficulty available in this lane of poetry, a poetry whose linguistic ambition is to evoke through active sense-making and unmaking. The American tradition of richly difficult poetry runs from Gertrude Stein’s tender buttons to the contemporary lyrically ambitious work J. Michael Martinez. What Lewis adds to the conversation via Zoom is a sequence of poems whose fragmented sensibility become a ride where one catches glimmers of meaning tinged with gloom.

The poem “Dear Sir” continues this work of moving between familiar and distinct phrasing:

or Madam, until you lose your head, mother its shred, wrapped in mystery & mead. No levity for this, your skid life. No mercy while you bilk your betters, sent flying to spy on your attempts to rise. Across the deep there are many with nary a hook to hang on. & ever & anon those lads with rainbow limbs snaking through the gloom. Another day another dolor. Not to mince woulds, but this sibilance is skilling us. & you who wish upon a stare? Where would you turn & fleetly tumble? The Burning Dervish never knows whereof he’d speak, mute as he is, spinning in his vicious circle, boring his whole through our dank & dappled gaps.

Here, idioms are approached and transformed, refreshed in a way that moves away from the typical reproach one finds in poems. Rather than turn a phrase for some argument or rhetorical stance, the transformation is executed with blunt power. For example, “Another day another dolor” is set as its own sentence, able to color both the previous and following sentence, but also standing as its own moment of distinction. This decision to let the new phrasing stand alone allows the original aphorism “Another day another dollar” to ring like an echo in the reader’s mind. Before one can fully unpack that, however, the prose paragraph structure moves the poem on to “Not to mince woulds, but this sibilance is skilling us,” another set of turns that invite both pause and movement. What is being worked out in this kind of difficulty is a poetry that points elsewhere than itself. The poem’s ending image of a dervish in a trance is telling, evoking a desire for spirituality through activity.

From the sight rhyme of “anger and danger” and the reference to Freud in the phrase “our history & its discontents” (“Everyone Agreed”), to the riffing and subverting of idiomatic phrasing (“Dear Sir”), what these poems offer is an engaged reading act where meaning is only part of the purpose. If narrative poems keep poetry connected to traditions of storytelling, then richly difficult poems like these keep poetry connected to traditions of the lyric voice, that personal, intimate, and engaged perspective whose presence alone gives it purpose and power.

Influence Question: What were the origins of this collection?

Susan Lewis: José, thank you so much for your interest in Zoom! The origins of this collection go back to my years-long interest in the prose poem, combined with another interest of mine, which happened to develop at the same time: in poetry as play – which is not, in my mind, inconsistent with addressing dark or serious concerns. One of the things I find interesting is how much play the prose poem allows! I’m drawn to the paradox of this form: poetry that is not lineated, that is, does not advertise itself as poetry. I love the tension this holds – the demand that the reader look beyond the obvious, and engage with what might make poetry be poetry. (A question I think is more important than any particular answer one might suggest). Writing prose poems has only deepened my love for the form: the concentrated punch of a discrete bloc of words floating in a white page; the implication that substantial things come in small packages; the impression these blocs give, of density and compression; the focused attention they ask of the reader.

However, I did not set out, ab initio, to write a book-length project, or suite. It was interesting: after writing some number of what I thought of as free-standing poems, their common concerns started to become apparent, and began guiding the development and features of the rest of the poems in the book. Some of these preoccupations are packed into the title, with its nod towards film technique, as well as velocity. Organized around the substantive and aesthetic potency of point of view, the poems in Zoom borrow from film technique to ‘zoom in’ from the objective/long shot/third person, to the medium shot/second person, to the subjective/close up/first person. All engage the ramifications of subjectivity via bricolage, parataxis, polysemy, and compression. I think of the collection as adding up to a kind of status report for our moment in this world, in which the frame narrows along with the point of view, from the global to the local to the individual. Especially concerned with the need for, and failure of, empathy and decency, as well as with how we perceive and communicate, these poems also amount to a progress report on the state of language itself. The consensus among these poems is that we’re zooming – if not to our doom, than to the brink, where we might still be able to stop ourselves from irreparably despoiling our psyches and our planet.

Special thanks to Susan Lewis for participating! To learn more about Lewis’ work, check out her site. Copies of Zoom can be purchased from The Word Works.

Susan Lewis (www.susanlewis.net) is the author of Zoom, winner of the Washington Prize, as well as nine other books and chapbooks, including Heisenberg’s Salon and This Visit. Her work has appeared in a number of anthologies, including They Said (Black Lawrence Press, 2018), Resist Much, Obey Little (Dispatches Editions, 2017), and Carrying the Branch (Glass Lyre Press, 2018), as well as in journals such as Agni, Boston Review, The Brooklyn Rail, Web Conjunctions, Diode, Interim, New American Writing, The New Orleans Review, Raritan, Seneca Review, Verse, VOLT, and Verse Daily. She is the founding editor of Posit (www.positjournal.com).

One thought on “microreview & interview: Zoom by Susan Lewis”