This week I’m excited to share two poems by Luis Cuauhtémoc Berriozábal. The first “Escribeme / Write Me” (below) is presented in both Spanish then English. Work presented bilingually always interests me as I take note of the word choice across translations.

Here, the word “coloreame” stood out first in Spanish as it is a variation of the verb “colorear.” In the Spanish alone, there is an emphasized intimacy in moving between “colorear” and “coloreame.” The difference in sense between the words translates essentially as “colorear / to color” versus “coloreame / color me.” The directness of this change is in keeping with the theme of the poem as it is a speaker asking to be written.

This move in Spanish from the distant vibe of “to color” to the more direct “color me” is evoked in English by Berriozábal’s choice of rendering “Coloreame” as “Animate me.” Reading across languages, I feel both a surprise and familiarity in seeing this translation. Surprise, because of the variation in word choice; familiarity because of how apt the word choice is in carrying over the poetic sensibility of the Spanish version. “Animate” carries with it its own intimacy, similar to the move from “colorear” to “coloreame,” as it is a word that evokes a specific urgency, one that is life or death. The speaker, in fact, feels as if they’re dying; to be (re)animated is the desire.

In “Book Without Feelings” (also below), this meditation on life and death continues from another angle. Here, the reader is presented with the scenario of a book able to read a human person. This relationship of the inanimate book reading the animated human self is intriguing in how it subverts our sense of meaning-making. Rather than reading a book for meaning, a book reads the speaker and undergoes a meditation of something beyond animation. The narrative that develops around the “story” of the speaker’s death, in a way, enacts the meaning-making act and finds that meaning is in short supply within a mortal context.

The casual quirkiness of this scenario allows us as readers to be surprised by how the speaker’s meditation hits in a severe way at the end. While the logic of a book not having feelings makes immediate sense, the comparison of this unfeeling state against that of a corpse drives home what is lost in death. That the book is left behind able to be used for meaning-making, but only by an animated self whose ability to make meaning is temporarily and mortally limited — this is where this poem took me. The surprising nature of this ruminative reading experience is a gift, one in keeping with the heart of lyric poetry.

Write me
I, too, want to be a poem
Spell me out
With the ink of a star
Animate me
With small brush strokes
Bring me joy
Because I’m dying of sadness

The book reads me.
It reads me as if I’m dead.
I’m the hero
who has run out of breath.
It is a load
of baloney. The book
reads about the dead man.

The battle was lost
and a corpse was created.

This was no poetry book.
It was not an autobiography.
The heart gave out.
The book read about
the insects at my grave
soaking in the sun above
and the gaseous fumes below.

The book closed the book.
It did not feel sadness.
It was just a book,
a book without feelings.
At least it was not a corpse.

Happy to share that my essay, “Becoming the Weather: Reflections on Poetry as Cultural, Political, and Spiritual Act,” has been recently published in Of Color: Poets’ Ways of Making ~ An Anthology of Essays on Transformative Poetics (The Operating System, 2019).

I’m grateful to editors Luisa A. Ingloria & Amanda Galvan Huynh for including my essay in this necessary and engaging anthology! 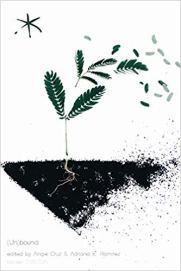 In further anthology news, I’m happy to share about having work featured in the following two anthologies:

Lastly, I am proud to share that 8 of my poems are featured at The Zen Space as part of the Spring 2019 Showcase guest edited by Daniel Paul Marshall. Special thanks to Daniel for showcasing these particular poems!

This week I’m excited to share a poem by Chelsea Bunn. I’m always a fan of poems that are able to evoke through juxtaposition. In “Missed Connections” (below), what is being juxtaposed is the speaker’s present surroundings with the memories that the surroundings evoke. This evocation is set up first through the clear naming of things: “the downtown 6,” “5 o’clock,” “an accordion,” etc. This clear naming grounds the poem in the speaker’s experience. The poem builds momentum through its descriptions which keep the reader “looking” at things alongside the speaker while an emotional undercurrent begins to build.

The poem takes a turn at the fifth couplet with the direct introduction of the idea of time past. This turn is furthered through the line “Private in my infuriating grief — ” which pivots the poem into the speaker’s inner memory world. What happens next is another clear naming of things, similar to the opening, but one that parallels the real world with memory. The echoes and differences here deliver emotional presence through juxtaposition. The “accordion” from the second stanza, for example, is mirrored in the “ventilator” mentioned in memory.  What was handled through distance in the present is suddenly re-presented in a way that is intimate and personal. 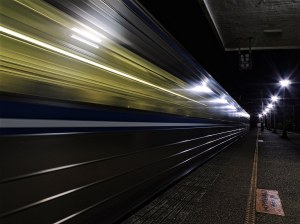 While this richness alone is a gift of the poem, it’s the ending that drives home the connection to human experience. This speaker caught in meditation between the present and the past is, at the end, found at a loss. All the clear naming and juxtaposition becomes all the more insistent and urgent with the final line “The things I couldn’t say.” This final line is another act of naming that points to what can’t be named, what has eluded the vision and scope of this speaker. Evoked in this manner, the two narratives of the poem show how poetry can be a place where “missed connections” can be acknowledged, honored, and felt for what they mean.

Waiting for the downtown 6 at 5 o’clock,
my other life comes rushing back in waves.

A man straps an accordion to his chest, opens
and closes its bellows, delivering long columns

of sound into the stagnant August air.
Across the platform, pairs of schoolchildren

march in procession, arms linked as if when someone
knows who you are, you won’t get left behind.

You: two years absent, phantom that I drag around.
Me: one year sober, still locked inside myself.

Still sequestered, still on edge.
Private in my infuriating grief—

waking daily from the dream of my father in his hospital bed,
ventilator squeezing and sucking at his chest even after he is gone,

after the blonde nurse has wrapped her clean arms around me,
after the long, low moan of the monitor.

The early morning light blasting through the windows.
The things I couldn’t say. Chelsea Bunn is the author of Forgiveness (Finishing Line Press, 2019). She holds an MFA in Poetry and a BA in English from Hunter College. A two-time recipient of the Academy of American Poets Prize, she serves as Assistant Professor of Creative Writing for Navajo Technical University. Find out more at chelseabunn.com

This week I’m excited to share two poems by Clara Burghelea. I was taken right away by Burghelea’s work and how it develops lyric momentum through complex imagery. In “Nostalgia,” for example, the idea of being “sick” for a body “before it was a body” immediately kicks off from the title into a meditation how bodies develop both a physical and emotional history. The body that once was, as described in the first stanza, “a prettiness slender / like a smack of wind,” is later in the second stanza the body that has known “heart as a dark vessel” and has grown “thick with other people’s thoughts.” The logic of these lines is visceral; youth is evoked as the body being more feeling than physicality, until, with time, the body grows darker and more weighted. This movement from fleeting to stillness by the second stanza returns us to the title. Nostalgia is often thought of as a light thing, an activity of kitsch and cliche. Here, however, Burghelea presents the concept of nostalgia in a way that shows how much longing and reason for longing lie behind it.

In “The Self as Introduction,” too, the body implies movement. The poem begins with the following image: “No wound loathes its scar, / yet craves the radiant absence.” Through this phrasing, the reader is invited to hold two conflicting ideas at once, that of loathing and craving, in a way that implies an erasure of self. Yet, because this loathing and craving is proposed as being enacted by a wound, the erasure seems less dire, merely conceptual. There is space enough here to see the implied message that radiance may involve pain. This implication builds momentum as the poem develops and it becomes clear that the speaker is speaking about what is at stake in human relationships. The line “What fell from your lips / came to nest into my mouth,” for example, presents an image whose logic builds tension. Even in the distance between bodies, there is a momentum at work, the momentum of interpretation and of thought within silence. The poem ends with a frustration of sense (similar to the longing of “Nostalgia”) in its final lines: “The gap on the page, / a muttering under a kiss.” What Burghelea gives us in these poems, ultimately, is a sensibility able to clearly evoke how much and how little of the body we’re able to hold onto.

I’m sick for my body
before it was a body,
bereft of aching and desires,
unaware of the shortcomings,
a prettiness slender
like a smack of wind,
a breathing silk of youth crowning it,
ready to deliver itself to the world,
without knowing it would be hard
to hold back its lush of innocence.

The body that hadn’t known
heart as a dark vessel,
no push of wind to sail its burden.
That body that had yet to grow
thick with other people’s thoughts,
its taps in disarray,
not a weight erased
but a weight made bearable.
This body I mourn the most.

The Self as Introduction – Clara Burghelea

No wound loathes its scar,
yet craves the radiant absence.

God’s laughter punctures
the arch of the sky

What fell from your lips
came to nest into my mouth

the thieving of the heart,
an unpremeditated entry.

The gap on the page,
a muttering under a kiss.

Clara Burghelea is a Romanian-born poet. Recipient of the 2018 Robert Muroff Poetry Award, she got her MFA in Creative Writing from Adelphi University. Her poems, fiction and translations have been published in Full of Crow Press, Ambit Magazine, HeadStuff, Waxwing and elsewhere. Her collectionThe Flavor of The Other is scheduled for publication in 2019 with Dos Madres Press.