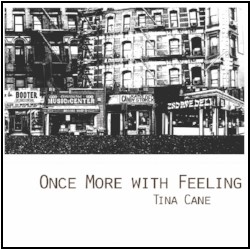 A Minor History of the East Village – Tina Cane

Maybe you knew a kid who booked through Tompkins Square on his Schwinn     and came out
the other side without the bike and in his socks     never mind he wasn’t buying drugs     this
the price of his stupidity    or maybe you went to Gem Spa three days in a row for egg creams
to flip through Interview magazine     still a stack of color Xeroxes assembled by Andy Warhol
or to The St. Mark’s Theatre to see Oh God! starring George Burns     Enough! you’d said
crouched on the seat     knees beneath your chin     rats scuttling the aisle for popcorn dregs
but it never was
not when that guy died trying to sleep in a hammock on his fire escape
off Avenue A     not when the cops found a woman’s head in a pot on her boyfriend’s stove
on Avenue B not when you and your friends mistakenly buzzed in the guys who would beat
Faye’s elderly neighbor close to death     junkies hunting jewelry or just high     they were men
you could describe     to the cops to anyone for a long time after
and when the paramedics had you
stand by the stretcher as they unjammed the brake     it wasn’t enough to want to take the woman’s
trembling hand     and it wouldn’t have been enough to take it

Reading through Once More With Feeling (Veliz Books) by Tina Cane one encounters a poetic sensibility able to write from a sense of place that is both exterior as well as interior. Place works here as both noun (NYC in the poem above) but also the verb. It is the singular way in which Cane places a poem’s attention on subjects ranging from city life to parenthood that creates a space/place for the “feeling” of the title.

In “A Minor History of the East Village,” the city is evoked as a place both mysterious and indiscriminate. From the kid who loses his bike and shoes, to the rats scuttling through the movie theatre, things keep happening at the edges where no one seems to notice or pretends not to. When the speaker says “Enough!” in the same italics as brand names and a movie title (Oh God!, fittingly), the feeling of being overwhelmed is evoked. Rather than pull away, however, the speaker is further pulled into documenting this “minor history” by the words “but it never was.” These words answer the cry of “Enough!” and act as a volta, pivoting the poem into detailing three neighborhood deaths, the last of which occurs in the speaker’s own building. Suddenly, what has been happening at the edges is happening directly in the speaker’s life. The word “enough” returns in the final lines in order to be pushed against further, and convey how the speaker is caught in a moment where every action feels futile.

The collection creates and dwells upon such places/placings of complication via other “minor history” poems, a number of lyric sequences, self portraits, and nocturnes. Throughout, we find a sensibility able to reckon with the statement made in “Nocturne: Restoration,”: “My fingerprints make residence upon the earth.” This idea that fingerprints (full of connotations of individuality as well as mortality and transience) can themselves be places is at the heart of the book. What traces (places) do we leave upon each other? How much power do we give to memory? To names? These poems take turns contemplating these questions, and seeking answers beyond them.

In the aptly named “Trip to Now,” we find the admission:

This idea of words being able to establish “something specific and perfect” while at the same time being a source of “ruin” reflects a seemingly conflicted idea of poetry. Cane’s poems, however, prove there is a fruitful and compelling tension in this conflict. It is what drives a poem like “Nocturne: Ludlow Street” (below). When the speaker states that “falling in love was like being on the verge of an accident,” we are left in a place that is both the search for something perfect and the need to avoid ruin. That this meditation leads to a scene between parent and son adds to the already high stakes.

In this scene, the nuanced insights happen at the level of line breaks. Reading that the future “is a parallel universe    we are driving” all on its own line, for example, has dual implications of control and lack of control. This jolt of meaning sets up the “fingerprints” imagery of the last line. This further surprising statement from the son carries a sense of gravity to it, and drives home the dual nature of place in this collection. In poems precise in their naming but open and flexible in their observations, Once More With Feeling engages with the idea that life happens between the places we consider and the places we imagine.

I could have stood there all night     staring at the Torah ark in your bedroom
looking for clues to the future     a disclosure     but the relic was a relic adorned
with Christmas lights in a semi-legal living space on Ludlow Street     its wisdom
not for me   falling in love was like being on the verge of an accident     I had kept
to myself for so long     often losing     in order to     falling in love was like being
shut out of ideas     a delectable trap   disclosure also often an accident
The future says our nine-year old son
is a parallel universe    we are driving
down a tree-lined street     Did they keep wood from Jesus’s cross?
he wants to know     No I say     There were fingerprints on it, I bet     he says     Yes

Influence Question: How would you say this collection reflects your idea of what poetry is/can be?

Tina Cane: I always characterize poetry as an approach rather than a genre. As such, poetry is a most flexible form and, like water, can fill any space the poet carves out. My collection, Once More With Feeling, reflects poetry as my attempt to understand the world and my experiences in it. I don’t write with any specific aesthetic or intellectual agenda. I write to understand. Having written a bunch of poems, however, does not imply that I’ve understood anything at all. And I don’t mean that in a deprecating way. I mean that writing is a path. My poems are stones I lay on my path, as I move forward.

Once More With Feeling is a book about place and love and grief and family, about glancing back while pressing on. That seems to me a most human, universal situation. The collection is grounded in particulars—NYC, neighborhoods, people—but is also me reaching out to the reader. To me, poetry is about connection—in all its incarnations.

Influence Question: What were the challenges in writing these poems and how did you work through them?

Tina Cane: This is the most explicitly autobiographical work I’ve written.  I had to work hard to balance my own sense of yearning and vulnerability with a degree of dispassion I felt was necessary to avoid lapsing into nostalgia. There’s always a risk of sentimentality when one writes about the past. While I do believe a poem should move the reader, I resent work that tries to corner me into feeling a certain way. Sometimes poems can hide their true strength behind coy and snarky humor—disguised as intellectualism. Sometimes poems over-share in a way that burdens. I was trying to negotiate between those spaces as I worked on this book. Whether or not I’ve succeeded is certainly subjective, but I wrestled for sure.

At one point, a friend and fellow poet told me he felt a presence in the collection that wasn’t on the page. It was an interesting comment–one that took on true relevance when we discussed “A Minor History of Bodega.” I came to see the “bulletproof glass” in the final line as a metaphor for something I was doing—allowing myself to be seen, but through an impenetrable veneer. Prompted by that conversation, I wrote a couple of  very spare “Self Portrait” poems in which the speaker is conflated with her mother. It was a small addition, but one that felt big to me.

Writing poems is rarely easy for me. Writing exerts itself on me.
As with life, in poetry I press on—collecting and sorting, seeing what gives.
It’s an exquisite kind of pressure to grapple with.

Special thanks to Tina Cane for participating! To find out more about Cane’s work, check out her site. Once More With Feeling can be purchased from Veliz Books. 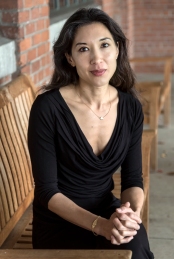 Tina Cane is the founder and director of Writers-in-the-Schools, RI and is an instructor with the writing community, Frequency Providence. Her poems and translations have appeared in numerous publications, including The Literary Review, Two Serious Ladies, Tupelo Quarterly, Jubliat and The Common. She also produces, with Atticus Allen, the podcast, Poetry Dose.

Cane is the author of The Fifth Thought (Other Painters Press, 2008), Dear Elena: Letters for Elena Ferrante, poems with art by Esther Solondz (Skillman Avenue Press, 2016) and Once More With Feeling (Veliz Books, 2017). In 2016, Tina received the Fellowship Merit Award in Poetry from the Rhode Island State Council on the Arts. She currently serves as the Poet Laureate of Rhode Island, where she lives with her husband and their three children. photo credit: Mike Salerno

See the giveaway details
at Goodreads.

One thought on “microreview & interview: Tina Cane’s Once More With Feeling”